No big changes on the scale front.  Since I began observing a few crawlers last week UNDER the scale cover, I decided to monitor twice weekly.  So far, nothing's changed.  This week I found ONE crawler on the stem, which is new.  Of the 237 live scale I observed this time around, 9 of the adults had a couple live crawlers under their armor (that's about 4%).  Remember, those live crawlers are 2 out of 40 or more eggs.  The bottom line: I think we're still early.  I was hoping for more development over this past week, especially with the warm weekend we had, but I'm just not seeing it yet.  I know bloom is right around the corner, so this isn't great news, but it is what it is.

Here are a couple of pictures of live scale, if you're interested.
This first one is a shot of five adult females with their armor removed.  They are incubating eggs. 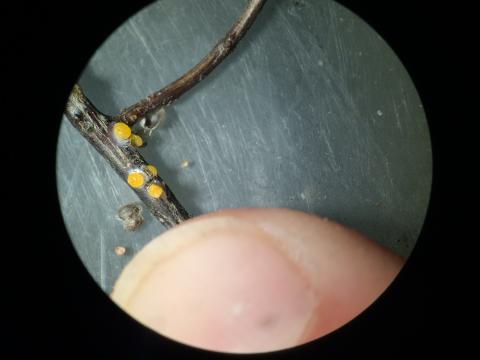 This second image is one of the females I observed that had live crawlers.  There were two live crawlers in this instance, but only one began actively moving around when I flipped the adult female over.  The other one had legs, but wasn't moving much.  The remainder of the 'crawlers' didn't have legs yet ... I don't know if this is typical or not, but these eggs were located under the armor but outside of the female's body. 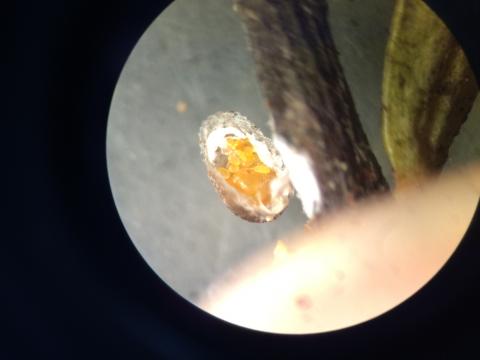 Should You Use an Adjuvant?
How to Fertilize Areas With Winter Damage or Leaf Drop
Surfactants and Cranberries
Phythophthera Root Rot Management
Phytophthera root rot